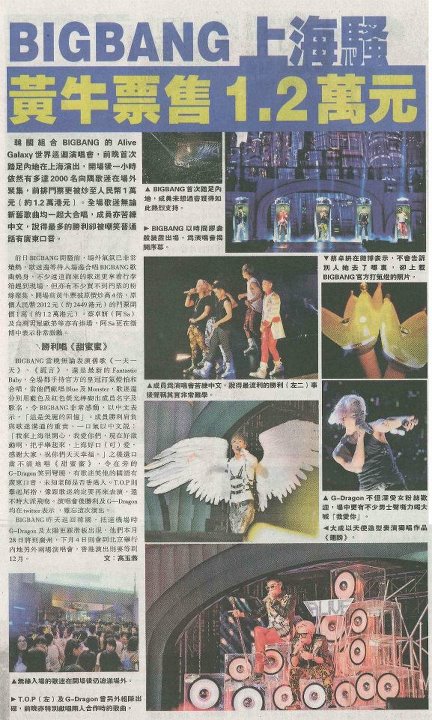 As part of Big Bang’s Alive Galaxy World tour, Big Bang set their foot in China the first time 2 days ago. 1 hour after their concert in Shanghai had started, there were still as many as 2000 fans who did not have a ticket waiting outside the venue. The price for the VIP ticket even reached 10000 Renmenbin. The fans sang both the new and old songs with the group. Members had also practiced their Chinese beforehand. The one who spoke Chinese most was Seungri but his Chinese was teased by the fans since they said he has Cantonese accent.

Before the show started, the atmosphere outside the venue was already hyped up.When the fans were waiting to get into the venue, they sang Big Bang’s songs together. There were also fans who came from other places to watch the concert so they were seen carrying their suitcases. However, there were also fans who could not buy the tickets gathering in front of the venue. Before the show started, the scalping tickets were priced at 10000 Renminbi. Charlene of Twins (a member of a famous Hong Kong duet group) and OD (a famous Taiwan star) have also gone there to watch their concert. Charelene has also expressed her excitement through her personal weibo.

On that night, no matter when Big Bang were singing ‘Haru Haru’, ‘Lies’ or new songs like ‘Fantastic Baby’, all the fans there sang with them. They also held the official crown lightsticks to cheer for them. When they were singing ‘Blue’ and ‘Monster’, fans then used their blue and red lighsticks to make the name of the members and songs. This act touched Big Bang so they expressed their gratefulness in Chinese, ‘this is a piece of beautiful memory.’ Seungri was responsible of communicating with the fans so he spoke a lot in Chinese,’ I am so happy that I am in Shanghai.I love you. I am so excited now. Put your hands up. Shanghai is cute. Thank you, everyone. I wish you happy every day.’ Then, he sang ‘Tian Mi Mi’ in Chinese which G-Dragon thought was so hilarious that he could not hold back his laughters. There were fans teased Seungri’s Mandarin, they said he has Cantonese accent. On the other hand, TOP flung his little finger out in order to make a promise with the fans that they would go to Shanghai again. He also blew kisses. After the concert, G-Dragon and Seungri expressed their feelings via the social networking websites, saying this was really a memorable concert.

Big Bang returned to Korea yesterday, G-Dragon and Taeyang were skating when they arrived at the airport’s arrival hall.They will go to Guangzhou on 28th and Beijing on 4th to have the other two concerts. They will go to Hong Kong in December, too.