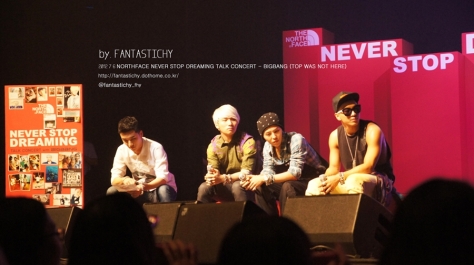 Could Big Bang release a new English language album? According to the group’s maknae there definitely is a possibility it is in the cards.

On July 6, during the “North Face: Never Stop Dreaming Talk Concert with Big Bang” in Korea the group met with fans and performed some of their latest hits. Even though T.O.P was noticeably absent, due to his filming schedule for the motion picture “Alumni,” fans need not worry as G-Dragon filled in for the husky, voiced rapper. Though he was still greatly missed.

While the group was speaking frankly to the crowd Seungri let slip that there might be an English language album in the works. According to various fan accounts Seungri was quoted as saying, “There is a possibility that Big Bang will release an album in English.”

Though this is not the first time the young vocalist has teased fans. His track record shows that he has often revealed secret information regarding his fellow members. Recently at a fan meet in Japan, he had even joked with group-mate G-Dragon and fans about the leader’s upcoming solo album.

On another note,a group of lucky Canadian fans were invited to the showcase as they were the winners of Big Bang’s cover contest. There they met the group and hung out with them backstage prior to the show. While there they tested the members English language skills. When asked about their “Alive” world tour visiting Canada, Taeyang confirmed and apologized to the fans that there will not be a Canadian leg of the tour.